Hello, I am Yuki, an owner of the YUKIMONO web store.
This is the second article about the bonsai potter, Gassan. (Part 1 is here!)
Gassan’s career as a ceramist of tableware started in 1975. After having been into Bonsai, he began making bonsai pots for his bonsai since 2008. For himself, making bonsai pots was just for fun but for the Japanese Bonsai pottery world, it should be said it was lucky because skilled bonsai potters who have various kinds of techniques like Gassan or young people who want to become a bonsai potter has been decreasing.
Once I asked him.
“Do you think about what the differences are with the tableware and the bonsai pot when you make them?”
He said.
“In Japanese cuisine, it is thought that the tableware are clothes for foods. I think bonsai pots are the same as well.”
I asked again.
“Are there any colors or patterns/paintings/designs that are fit for tableware but not bonsai pots or the opposite?
“I think there is nothing. Even though there are colors or patterns that are not good for bonsai pots, it depends on the combination, it turns out that it can match beautifully.”

This pot with the painting of “the rabbitsjumping on the waves” is one of his new works. 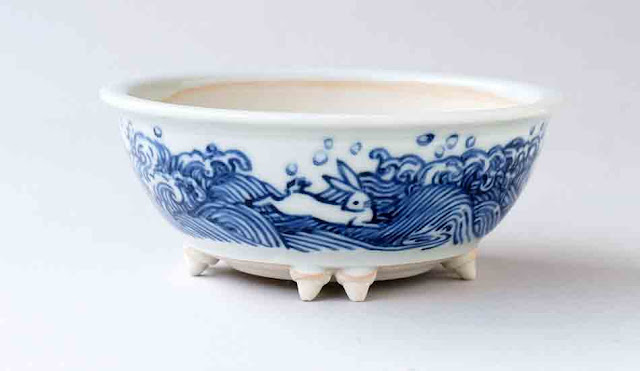 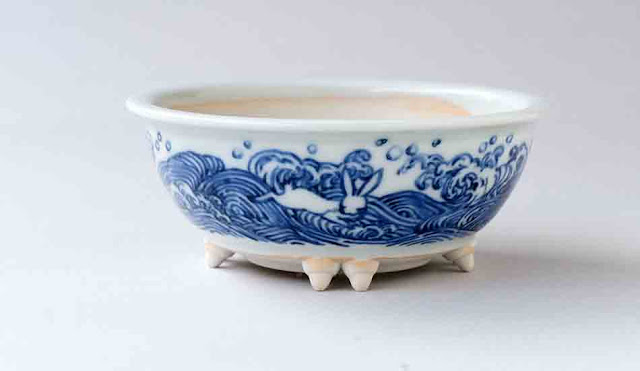 According to him, it was the first time for him to paint the rabbits & waves painting in his bonsai pot. The technique used is “Shita-etsuke (What is it? you can see here*).” He was going to add “Uwa-etsuke” after “Shita-etsuke” just like when he made tableware, however, he stopped because he realized it would be excessively fabulous for the bonsai pot.
(To be continued)