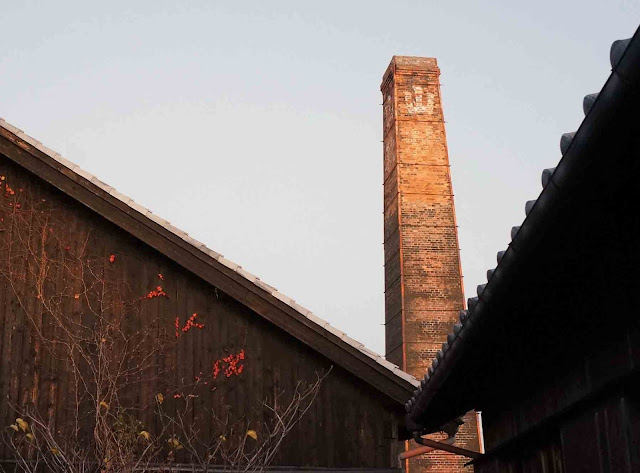 Japanese bonsai pots were born in Tokoname roughly 150 years ago. Today, the name Tokoname is synonymous with bonsai pottery and well known around the world. Let us explore its history and the accomplishments of our forefathers.

Tokoname City, Aichi Prefecture, is known to be one of Japan’s Six Ancient Kilns. Its pottery-making history dates back nearly 1000 years. Production of earthen jars and pots began in the medieval age, red “Shudei” teapots appeared in the modern period and clay pipes, tiles and toilets have been manufactured since the Meiji Period. As the first bonsai pots in this history, it is said that plant pots for orchids were introduced in the mid-1800s. They were produced in large quantities from the late Edo Period to the Meiji Period, as demonstrated by the large plant pots that appeared at the First National Industrial Exposition in 1877 and more pots from Tokoname exhibited at the exposition several years later. However, that did not mean that Tokoname became the center of bonsai pot production right away. Let us look into the landmark developments that led to its rise.

The first development that fanned its growth was the bonsai boom that spread in the early Meiji Period, first from Osaka, then to Tokyo and around the rest of Japan. By the middle of the period, Tokoname pots began to appear as pots made exclusively for bonsai plants. The majority were round pots shaped on the pottery wheel but were soon followed by rectangular pots, chiefly for bonsai use. Due to the popularity of "Deimono*" earthenware pots among bonsai fans, the soil in the area around Tokoname was probably best suited for the clay to making the "Deimono*" bonsai pots.
*Deimono: Unglazed bonsai pot
At that time, Seto in Aichi Prefecture enjoyed overwhelming popularity for its plant pots. Since the latter part of the Edo Period, Seto provided plant pots in vast quantities to all parts of Japan, offering from elegant, artistic pots to be presented to the homes of feudal lords to affordable pieces for the common people. By the end of the Meiji Period, Seto plant pots began to disappear. Mr. Takashi Furuhashi , a researcher on Seto plant pots, attribute this in part to "Seto pottery in the Meiji Period losing the patronage of the lord of Owari and other feudal lords that it enjoyed in the Edo Period." Although plant pots continued to be made in Seto in the Meiji and later periods, less and less effort was put into the craft in comparison with the quality attained during the Edo Period, leading to a decline in pottery craftsmanship.

While Seto plant pottery declined, bonsai pottery in Tokoname gained momentum, stirred by demand from bonsai gardeners. By the middle of the Meiji Period, efforts were being directed to reproducing the old Deimono pots of China, regarded as the finest by bonsai aficionados. This diligent work reached fruition with high-quality Deimono beginning to appear in the Taisho and early Showa periods, dubbed "Taisho-toko" by fans. These pots earned the same praise as that directed to the Chinese pots.

The late Akiji Kataoka (also known as Juoudo-shosen 十王堂 松泉, his professional name as a potter), founded Kataoka Seitosho (later renamed Yama’aki) in 1920 and conducted research into old Chinese pots with great diligence and contributed to the advancement of the quality of Tokoname bonsai pots. The company's reference literature shows that pots from his kilns bore the "Kinka-zoin" impression, a famed ancient Chinese pottery brand, in 1927. Although the seal impression was placed at the request of a wholesaler, it demonstrates that the quality he achieved at that time was already so high that they could not be distinguished from their older Chinese counterparts.

Although not widely known today, bonsai pot production in Tokoname reached a high in the early Showa period, reportedly peaking in 1932-1936. Under these circumstances, the first national bonsai exhibition, Kokufu-ten, was held in 1934. With the rise in the demand for bonsai, the variety of pots expanded, both in shape and color.  The types of clay included, udei (grey clay), shudei (vermilion clay), shidei (purple clay), kokudei (black clay), and hakudei (white clay). Examples of glazed pots are namako (sea slug), kinyou (sky blue), blue, and white. Shapes also were various, including round, rectangular, oval, hexagonal, octagonal, hanagata (flower-shape), mokkou (Japanese quince), and kengai (cascade style) shapes. The fundamental styles seen in Tokoname today were already established at this time. With the outbreak of WWII, however, bonsai pots, regarded as non-essential to the war effort, disappeared.

Demand for bonsai pots recovered slowly from the 1950s and reached a golden age in the 1970s and 1980s. The post-war bonsai boom accelerated the spread of Tokoname pottery across Japan. In the 1973 breakdown of flower and bonsai pot production centers in Japan, Tokoname ranked at the top with a 50% market share. Despite the subsequent decline in the demand for plant pots, Tokoname continued to enjoy the top share of Japan's bonsai pot market. When Tokoname pottery gained recognition as a traditional craft in 1976, its bonsai pots drew attention as well.
The potters of bonsai pots during this period engaged in experimentation, including improvements in the clay and the development of new glazes. One such effort was the reproduction of ancient Chinese udei and shidei clays. According to Mr. Katsushi Kataoka (professional name: Reiho), Tokoname bonsai pots were made chiefly with shidei, hakudei and kokudei. There were udei pots but not in the color seen today. His father and fellow potters decided to create the finest udei pots and tested all types of clay found in the Tokoname area.
Glazed pots saw improvements as well, with colors not seen in the prewar days being introduced as glazes. The late Masakazu Shimizu (professional name: Yozan), a prominent master of glazed pots, succeeded in the commercialization of the first cinnabar bonsai pots in Tokoname.

There is no doubt that Yamaaki, the largest pottery production operation in Tokoname, played a major role in the advancement of bonsai pots from the region. More specifically, its accomplishments were the creation of high-quality products that show sophistication and dignity as bonsai pots in color, texture, shape, etc., as well as their superb functionality as a receptacle for plants, and for paving the way for mass production in factories. Yamaaki founded by Akiji Kataoka in the prewar days opened its new factory in 1971. The giant gas kiln with its capacity for 100-200 large pots was fired 5-6 times a month during the peak period. Although mass-produced, veteran craftsman attended each step of the production process, finishing the product with care and attention. The company also worked on improving pot breathability and reducing weight with the addition of sawdust to the clay.

Another point of great importance is that Yamaaki had the foresight to pour energy into sales. According to Mr. Sadamitsu Kataoka (professional name: Koshosen 小松泉), the founder's son, the company has been exporting bonsai pots to other countries since 1950. He said, "I myself went to the United States for a year after graduating from high school (around 1968-1969). Initially, I was able to live in a trading company dormitory in a town near Los Angeles and sold pots to bonsai vendors in America." Their products were exported not only to the United States but also to Europe and even to China via Hong Kong. He believes that Tokoname pots gained global recognition because they were being sold overseas from that time.

Thank you very much for reading this blog post to the end!
Back to blog